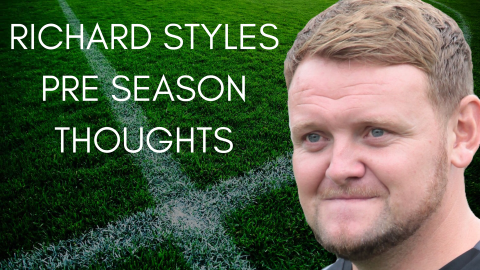 The Wells begin Pre Season on Saturday when they travel to The Abbey School In Faversham to face Bostik South East side Ramsgate, managed by former Wells centre half Nick Davis.

We caught up with new Wells manager Richard Styles to hear his thoughts on squad developments and the upcoming pre season schedule.

TWFC - How happy are you with the squad you have assembled so far and can we expect anymore signings?

RS : Squad wise I’m happy where we are right now. I am happy with the players we have brought in and signed and I’m also pleased with the number of selected trialists we have had to look at and work with also.

There’s a good talented group there to work with and their application to training and our setup has been fantastic. we are not finished (Signing players) and there’s more to come between now and the start of the season.

TWFC - What are you hoping to learn and gain from our pre season schedule?

RS : Pre season games will allow us to put into practice the ways im asking the team to play and get the cohesion right, It also offers the players an opportunity to show me what they can do and of course improving their match fitness.

TWFC - Nick Davis has been busy making signings. What are you expecting from Ramsgate in our first pre season fixture?

RS - Nick has shown his intent for the upcoming season with some great signings and tomorrow’s fixture allows us to be able to compete against a team from a league above, it’s our first run out as it is there’s and I’m sure it will be competitive game and not too much between the 2 sides overall.